If you are reading this review, you must have learned a lot about VPN in general. Maybe, you need an expert opinion on what to consider before using any of these two VPNs. Without a doubt, you will agree that ProtonVPN and NordVPN have been among the leading VPNs in the past decades.

VPNs are used primarily because of privacy issues. Users want their IP address or personal information out of prying eyes. These are good reasons to start using a VPN. However, I recommend that you consider other factors before subscribing to any VPN.

Also, considering only the VPN features without comparing them with other VPNs is not okay in the long run. If these factors are not accurately weighed or compared to each other, new and aspiring VPN users may be disadvantaged when surfing the net.

After spending a considerable amount of time on both ProtonVPN and NordVPN, we have put to rest any debate on which is better between the two VPN service providers in this review.

The following review is a carefully thought-out discussion that exhausts all the possible features any VPN can offer. Consequently, putting the two VPNs on the weighing balance.

At the end of this article, you can decide the actual winner of the VPNs in question and choose which one is the best choice for you.

Although the VPN is open to different users, it was created mainly for journalists who need to express themselves or report information without getting arrested.

ProtonVPN has a friendly user interface that about anyone can find their way around. You can navigate the app with just intuition alone.

The VPN has about 1000+ servers in 54 countries and has custom-made prices for every income level. Unlike most VPNs, ProtonVPN is super affordable.

You can read our ProtonVPN review and check out its full details.

If you are religious, like torrenting, and have experienced the incredible internet speed that NordVPN has, then you can boldly say NordVPN is God-sent.

The app is a Panama-based VPN that has over 5300 servers in over 60 countries.

Apart from the excellent lent IP masking, if the p2p sharing optimized servers are connected with any torrenting servers, the user has the best time on the internet. You can read our review of NordVPN and explore the benefits of this premium VPN.

ProtonVPN vs. NordVPN - Which One Has Better Privacy Features?

Privacy is not just any word. It is a complex one. In the world of VPNs, privacy features are closely related to IP masking, data encryption, kill switch, and so on. Hence, it is impossible to tell how good the privacy features of a VPN are without actually exhausting any of these details.

Five eyes, 9 eyes, and 14 eyes jurisdiction: this term describes VPN service providers under the jurisdiction of a government that makes it compulsory to share the information of its users with them.

If the VPN used is indigenous to them in countries like this, they must share that information with the government.

Thankfully, both ProtonVPN and NordVPN are not under this jurisdiction. NordVPN Is based in Panama, while ProtonVPN is based in Switzerland. Both countries have liberal laws on VPN use.

IP masking: both VPNs are pretty good at hiding the user's IP address. The way they do it is just practically different. For NordVPN users, before a user can get a dedicated masked IP address, they need to subscribe for a premium version of about $70 per year.

Regardless of the tier of subscription, ProtonVPN regularly switches the user's IP address. Most VPN users dislike dynamic and ever-changing IP addresses because sometimes their devices are linked to an IP address with a terrible history.

Strict no-logging policy: talking about privacy without discussing this headline will be pointless. When VPN is used, logs are placed. However, the problem with these logs is how they track their users when they are kept.

So, any VPN service provider whose log policies are not transparent has a dangerous privacy history. Fortunately, both NordVPN and ProtonVPN have strict no-log policies. Hence it is difficult for anyone to track internet use back to you.

Split tunneling: the protocol for split tunneling is vital for anyone who uses public data or service providers like a hotspot. When anyone uses split tunneling, they can connect to both public and private networks.

It may look tiny, but it has importance. With split tunneling, you can check little things like the traffic situation with your public network and still do big secret things like 'stealing the moon' privately and simultaneously.

Both VPNs provide the split tunneling luxury. However, NordVPN may be a little selective on the device compatible with the feature.

It takes less than a fraction of a second for hackers, government officials to get the information required by any network glitch in VPNs. Hence it is impressive to have a kill switch as a part of the VPN.

*From all the privacy features highlighted, it is safe to say both VPNs, ProtonVPN and NordVPN, are on par when it comes to privacy. Apart from the split tunneling, which is selective in NordVPN, the other features are actively present on both VPNs.

Even if split tunneling is absent, it does not spell a privacy issue for NordVPN at all.

Many users have cited how VPNs have remarkably or minutely reduced their internet speed. The truth is, VPNs generally slow internet speed down.

However, it is by a few milliseconds: so small it should not be noticeable. Therefore, a concern should be raised when using an ultra-slow VPN.

However, before making a verdict on these VPNs' connection speed, please consider the following.

The type of device where the VPN in question is being used can cause a disturbing network connection. Some devices may be pretty old for the type of VPN being used.

Some servers may be congested, while others may be too far from your location. It is better to choose a premium plan server that is less congested and close to your location to determine the VPN's speed accurately.

For the speed test of either VPN, the metric is under three parameters- pings, download, and upload. However, you need to check many geographical locations, occasionally put off and on your VPN, and then find the average.

For example, in the United Kingdom, NordVPN ping speed can go as high as 265mbps, and its download and upload speed is 92 and 97 Mbps, respectively. However, it can go as low as 20mbps in some other geographical locations.

With ProtonVPN, the United Kingdom download speed is 69mbps, pings are 36 Mbps, and upload is 69mbps.

Therefore, when it comes to speed, ProtonVPN stands no chance against NordVPN.

Though, ProtonVPN has a reasonable price offer that satisfies every need. Its services do not measure up to NordVPN.

The vast array of servers that users can pick from in NordVPN is many compared to the limited option in ProtonVPN. When servers are many, users can easily switch in case of VPN server congestion.

The internet speed, on the other hand, puts ProtonVPN in a tight spot. If that is not enough, ProtonVPN has a below-par customer service that rarely answers customers' queries. Whereas NordVPN provides customer support 24/7 in about 13 languages.

Without a doubt, NordVPN comes out as a clear winner here.

When it comes to security, there is no winner here. Both VPNs provide fantastic security options for their users.

ProtonVPN and NordVPN data encryption is a military-grade AES 256-bit encryption that is very difficult to bypass or hack. They both provide a strict no-log policy.

Either you use protonVPN or NordVPN, it is impossible to track browsing histories or any digital footprint, for that matter, back to you. Both VPNs in question operate strict no-log policies, highlighted the first time the app is used.

Some governments make sure that the data and information of every internet user get to them. The purpose is not entirely clear, as they claim to use it to monitor illegal activities going on in their countries.

Governments that operate these rules fall under the 5 eyes, 9 eyes, and 14 eyes jurisdiction.

A famous example, in this case, is the United States and some European countries. If a particular VPN service provider is situated in these countries, they must share their information with the government.

However, neither ProtonVPN nor NordVPN are based in any of these countries. Hence there are no prying eyes into your browsing affairs.

Being the faster VPN, NordVPN indeed takes the edge here. Its compatibility with nearly all devices and the ability to unblock many streaming platforms like Netflix, HBO, Hulu e.t.c. is almost incomparable.

NordVPN, because of its speed, deals well with unnecessary buffering and throttling of many streaming platforms.

ProtonVPN also has a good streaming ability but cannot stand close to NordVPN because of its incredible internet speed. Internet speed is crucial to any enjoyable movie streaming moment on the internet.

P2P activity and file sharing are available on both VPNs. But, due to the number of large files involved in torrenting, you don't want to try sharing files or downloading one with an abysmal internet connection speed.

ProtonVPN is doing just fine when it comes to torrenting and file sharing. However, when placed side by side with NordVPN, it is lacking.

NordVPN offers both monthly and annual plans. The most popular and best offer is a 2-year plan that costs about $3.30 each month.
Also, a 1-year plan is available at $4.92 per month. Meanwhile, the monthly plan costs $11.95 monthly. 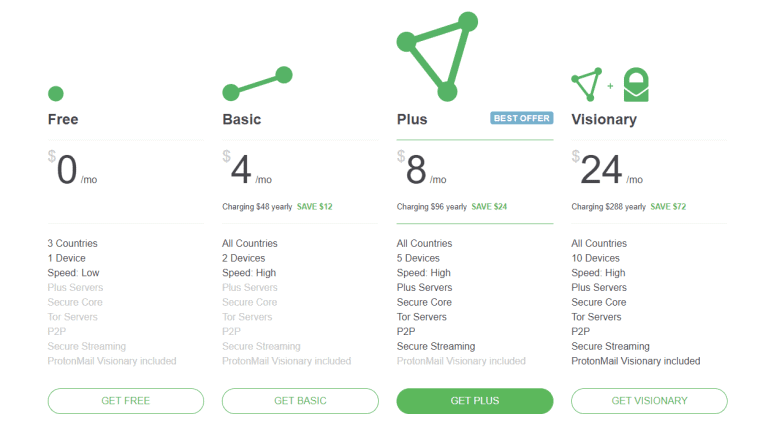 There are four types of pricing plans made available for their users. It includes the free plan, the basic plan, the plus plan, and the visionary plan.

The various plans have specific services that distinguish them. The free plan, for example, is limited and cannot enjoy the same services as the basic plan.

NordVPN has an easily understandable pricing system and thereby is the winner of this section when it comes to pricing.

For both NordVPN and ProtonVPN, each of their users is guaranteed a 30-day money refund policy. There are no differences in the refund policies of both VPNs.

ProtonVPN has carefully thought out plans for their prices. However, the prices/services rendered are complicated to understand.

Another problem is that, even for the highest-ranked plan, the visionary plan, the value rendered is poor and doesn't commensurate with the money paid.

The ridiculous part is being left hanging by the customer support when lodging complaints or adjusting questions.

NordVPN, on the other hand, provides every value for the token paid. The VPN provides blazing internet speed as well as outstanding customer care service.

NordVPN and ProtonVPN are both premium VPNs. You can’t go wrong if you choose either of them. However, after carefully considering the features of each of the VPNs, it is clear that NordVPN is the better option. You can also check out an example of a similar article of NordVPN vs another premium vpn.

NordVPN provides you with better value for your money, faster internet speed, more servers, and better torrenting and streaming. You can still get these services from ProtonVPN but not at the same price or quality.

Therefore, if you want the very best of the best among these two, NordVPN is the choice for you as this review has clearly shown.

The VPN that just works.

By: Michael Miller
Michael is the CEO of VPN Online, one of the fastest-growing media companies in the cyber-security space. VPN Online was started in 2019 after Michael consulted with many Fortune 500 companies and saw the lack of understanding about cybersecurity many of their employees had.
Quick navigation
1. ProtonVPN
2. NordVPN
3. ProtonVPN vs. NordVPN - Which One Has Better Privacy Features?
3.1. Speed Test
3.2. Features
3.3. Reliability
3.4. Security
3.5. Logging Policies
3.6. Jurisdiction
3.7. Streaming Capabilities (Netflix, Hulu, etc.)
3.8. Torrenting & File Sharing
3.9. Pricing & Plans
3.10. Refunds Policy
3.11. Value for Money
4. Conclusion (Overall Winner)