ExpressVPN is a competitive VPN. Because of this, it has managed to outdo many of its rivals in the industry. Like other VPN providers, it releases Black Friday and Cyber Monday discount promotions which allow you to get it for an absolute steal.

By reading this article, you will know everything about ExpressVPN’s 2022 Black Friday and Cyber Monday deals. As a result, you’ll be able to buy the VPN as cheaply as possible.

The period between Black Friday and Cyber Monday is so close that ExpressVPN doesn’t come up with different promotions for each of the two particular dates.

Rather, it maintains a single promo that’ll let you get a subscription for the lowest available price during the whole year. Let us discuss these promotions in greater detail below:

At present, ExpressVPN only has a single Black Friday/Cyber Monday promotion.

By availing of it, you’ll be getting a 1-year subscription plus 3 months of free service for a mere $80.4. As with every other subscription of ExpressVPN, this is backed by a 30-day money-back guarantee.

Missing out on ExpressVPN’s discount promos would be a waste. After all, who’d want to pay $194.25 for a subscription that could otherwise be bought for $80.4? Hence, if you are set on buying ExpressVPN, the perfect time to do so would be from Black Friday to Cyber Monday. 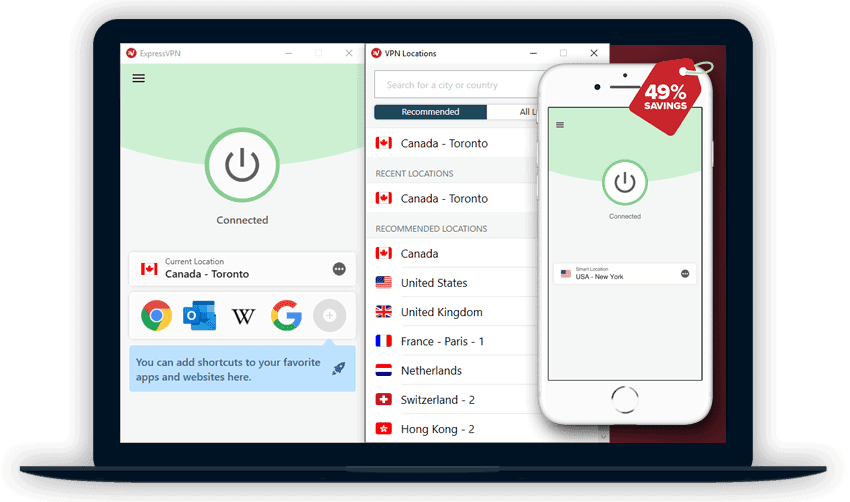 It would be wrong to talk about VPNs and not mention ExpressVPN. That’s because the service provider has long been a trailblazer in the industry.

Online security experts hold it in high regard due to its ability to safeguard its users, unlock restricted content, facilitate safe torrent sessions, and maintain fast internet speeds.

ExpressVPN has a huge RAM-based server network that’s made up of 3000+ servers spread across the globe. Furthermore, it’s based in the British Virgin Islands - a territory that isn’t governed by the restrictive policies of any of the world’s major surveillance alliances.

When it comes to encryption, ExpressVPN uses AES-256 technology. Meanwhile, it supports a wide variety of protocols. Interestingly though, the provider doesn’t support WireGuard. In its place, there’s a fast and secure proprietary wolfSSL-based VPN protocol called Lightway.

Every one of ExpressVPN’s servers is P2P-enabled. On top of that, they’ve also got superb speed and unlocking capabilities. This makes them perfect for downloading as well as streaming content, even in places like China, where internet censorship is rampant.

The many native applications of ExpressVPN are all very easy to use. Mastering them is certain regardless of whether you’ve used a VPN before or not. With that said, you should also know that these apps lack many key features that most VPN services have like an ad & malware blocker.

Fortunately, the customer service network of ExpressVPN is excellent. You may get in touch at a moment’s notice with the provider’s representatives at any hour of the day. Also, when contacted via email, you are almost certain to get a quick and detailed response.

From there, simply avail of the promotion you wish to avail then make your purchase. Keep in mind that all transactions with ExpressVPN come with a 30-day money-back guarantee.

ExpressVPN’s Black Friday and Cyber Monday deals last a few days after the dates of both events are over. Thanks to that, you may still take advantage of the provider’s discount promotions even if you missed out on purchasing it between the 25th to the 28th.

I’d also like to state that Black Friday and Cyber Monday aren’t the only times of the year that ExpressVPN releases discount promotions. In fact, it’s a regular practice for the provider to come up with coupons that let you buy a subscription for a cheaper price.

Needless to say, the absolute best time of the year to purchase ExpressVPN is during the days of its Black Friday/Cyber Monday promotions. This is because this period is when the service provider is at its cheapest during the whole year.

Which VPN Plan Should I Choose?

The VPN that just works.