Is Avast VPN Good and Safe for P2P Torrenting?

No. Avast VPN isn’t suitable for torrenting. While it’s without a doubt a decent VPN provider, it’ll only disappoint when used for the said job. How come? Continue reading to find out.

These are the selling points and disadvantages of Avast VPN for torrenting:

Avast VPN does allow for torrenting activity on its network. However, the service discourages the downloading of copyrighted material. That said, it has a small set of P2P servers that are capable of facilitating safe download sessions.

How to Use Avast VPN for Torrenting

To install Avast VPN, you’ll first have to purchase a subscription then create an account. After that, you may download the service’s native application for your device on its website. Once you’re done downloading that application, you may go ahead and install it.

Avast VPN’s applications install automatically on most operating systems. Needless to say, you may want to opt for manual installation for various reasons. Do not get concerned though since the service’s developers have made their VPN service very easy to setup.

Following the installation of Avast VPN’s app on your device, you may not start it. Remember to avoid opening your torrent client before opening the service’s application. When that’s done, you’ll end up creating a pathway that hackers can exploit to find out your personal info. 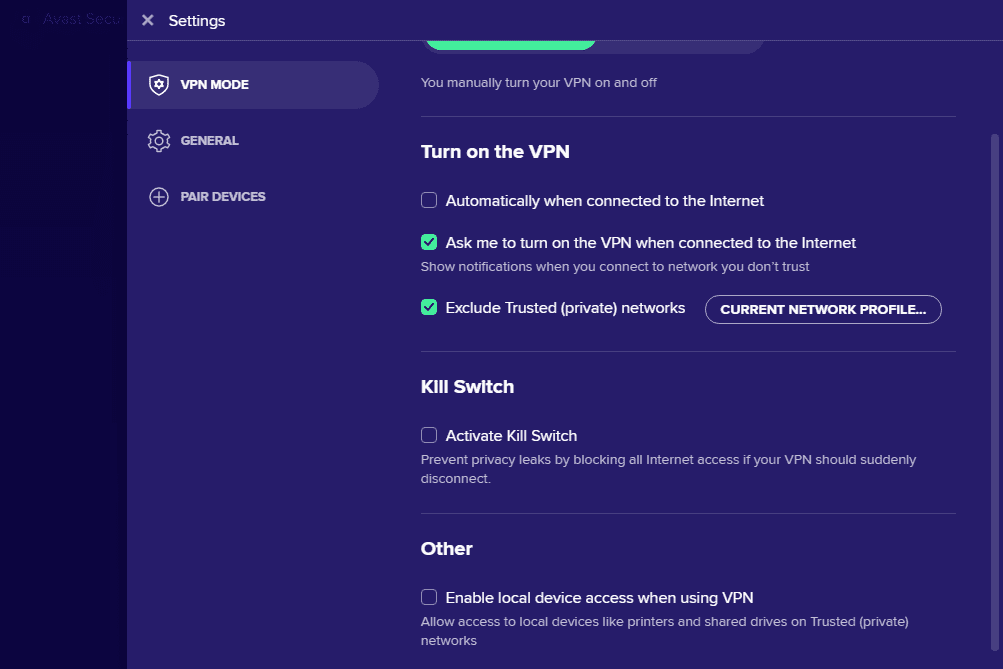 After opening Avast VPN’s app, go over to the settings menu and turn on the VPN provider’s kill switch feature. Make sure to not forget this step as the feature is off by default. Besides that, torrenting without a kill switch is a very bad idea as you’ll be putting yourself in danger.

The automatic kill switch feature of Avast VPN gets your device off the internet if ever its link to the VPN’s servers gets compromised. While it may seem rather intrusive, it can be a lifesaver especially if you’ve got a poor internet connection or live in an area with frequent brownouts. 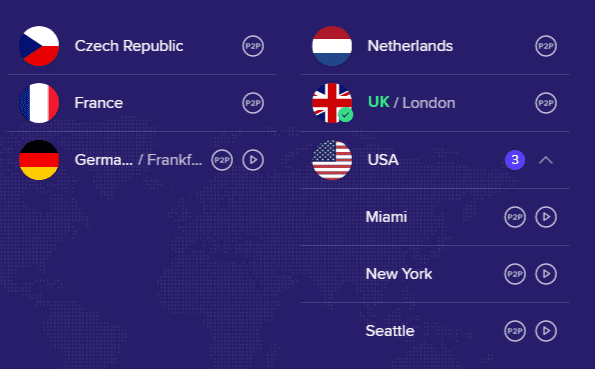 Upon activating Avast VPN’s kill switch, the next thing you’d want to do is connect to one of the service’s P2P servers. Doing this is easy because all of the provider’s applications provide you with a list to choose from. If anything, this makes things really convenient. 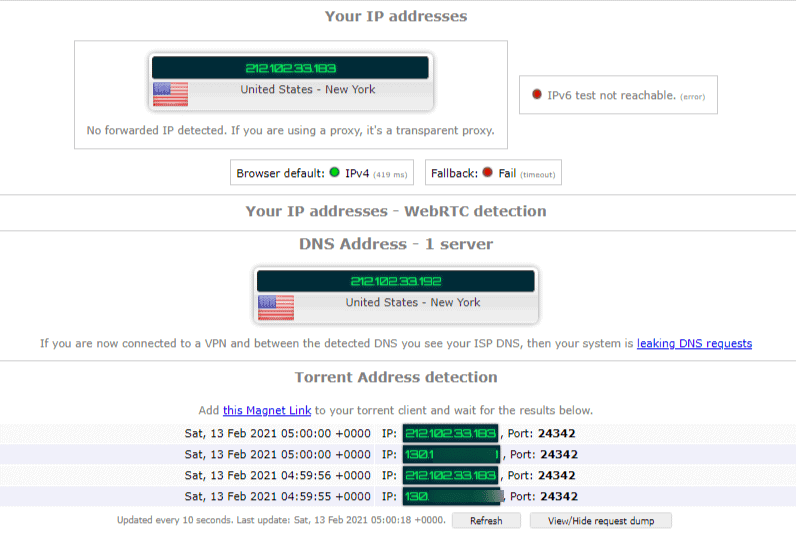 Right after connecting to a suitable server, go straight to IPLeak.net and then perform a torrent leak test. If everything goes as planned, the testing software shouldn’t be able to detect your real IP address. However, in case it does, move to another server and repeat the process.

In case Avast VPN and any of its P2P servers don’t pass your tests, don’t utilize the VPN for torrenting. Rather, simply request a refund then go with another provider. With that being said, Avast VPN was never able to pass my tests when I was using it. Hence, I don’t believe that it’s suitable for torrenting.

If everything goes perfectly, you may finally download a torrent safely and anonymously. Simply open your torrenting client of choice then pick a magnet link from your preferred site. Keep in mind that downloading takes time and you should never close Avast VPN while doing so.

Is Avast VPN Good and Safe for P2P Torrenting?

No. Avast VPN is no good for torrenting because my tests have shown that it leaks. Despite having the means to facilitate safe downloading, it cannot protect you. This is unfortunate, considering the fact that the VPN is based in the Czech Republic, which is a country that experts regard to be VPN-friendly.

Avast VPN has a zero-logging policy that prevents it from gathering and storing the information of its subscribers. Sadly, no third-party has ever audited the service, meaning there’s no real way to tell if it truly keeps the private data of its users safeguarded.

The network of Avast VPN consists of only 55 servers. Among those, only a small handful are P2P enabled. In addition, none of the VPN provider’s locations are RAM-based. Hence, every server that’s in operation can still keep logs. As such, you may never be sure if you’re safe.

An automatic kill switch is the only special feature that Avast VPN has. Unlike its competitors, the service doesn’t have a built-in malware blocker. On top of that, none of its apps have split tunneling or any other unique offering that’ll make them stand out and keep you protected.

Sad to say, Avast VPN doesn’t work in China or any other country where the internet is highly restricted. Because of that, you might want to opt for another more capable VPN if you travel frequently. Having Avast VPN shall certainly only leave you disappointed.

One of the things Avast VPN is most well-known for is speed. Despite it having few servers and a bandwidth cap of 2 Gbits/s, it’s one of the fastest VPN around. My tests have even shown that it could compete with the likes of NordVPN, Surfshark, and ExpressVPN, which are all fast.

Here are what Avast VPN works on:

Unfortunately, the compatibility of Avast VPN is limited to Firefox, Google Chrome, Windows, macOS, Android, and iOS. Currently, it can’t be used on Chromebook OS or Linux. And yes, there’s no workaround to this since the VPN provider doesn’t have router support.

If you’re wondering, Avast VPN is compatible with all major torrenting clients. Therefore, it will not matter whether you’re using Deluge, Vuze, uTorrent, BitTorrent, or qBittorrent.

Avast VPN is one of the most affordable top-tier VPN service providers. You can pay as low as $3.99 a month to use it. Of course, in spite of that, I still believe that many other more costly VPNs are better. After all, the service has so little to offer to its subscribers.

You can use Avast VPN without cost for 7 days. Following that, you’ll need to purchase a plan and pay by the month to continue using it. However, if you ever have regrets, the service maintains a 30-day money-back guarantee policy that’ll have your back.

Avast VPN should not be used for torrenting purposes. Besides having a rather small array of P2P servers, it also doesn’t pass my leak tests. In addition, the VPN lacks essential VPN security features apart from an automatic kill switch.

The compatibility of Avast VPN is also inferior. Although it has applications for the most common operating systems, there’s no way to use it alongside Chromebook OS and Linux. It even does not have router support, which is standard for VPNs nowadays.

While it’s very affordable, I simply think that Avast VPN isn’t worth it. You’ll be better off with another more expensive service that has much more to offer. If you currently don’t have the budget, don’t take the risk and save until you’ve got enough to purchase another provider.

By: Erwin Caniba
Eric is the co-founder of VPNOnline. He has been an avid user of VPNs since 2012. He has tested all of the major VPN providers and shares his findings on this website. Follow Eric on Facebook.
Quick navigation
1. Does Avast VPN Allow P2P Torrenting?
2. How to Use Avast VPN for Torrenting
2.1. 1. Install Avast VPN
2.2. 2. Start Avast VPN Before Starting your Torrent Client
2.3. 3. Activate Kill Switch
2.4. 4. Connect to Avast VPN P2P Server
2.5. 5. Verify for Leaks
2.6. 6. Start Torrent Client and Download Torrent
3. Is Avast VPN Good and Safe for P2P Torrenting?
3.1. No Logs Policy, Security Features
3.2. Speed Capabilities
3.3. Compatibility, Simultaneous Connections
3.4. Pricing
4. Putting It All Together