The Canadian TunnelBear has grown and improved tremendously to the point where we’ve had to review it! What we found will impress you too.

58% Off
TunnelBear's easy-to-use VPN app helps you browse, stream, and work securely from anywhere.
Get the Deal

McAfee, a Canadian company, owns Tunnelbear, and unlike other services, it is free of jargon. Instead, a graphical representation of bears greets you, treats you, and explains everything to you!

Protocols, encryption algorithms, or any other technical term for that matter will not be mentioned much. Instead, the VPN focuses on the fundamentals while clearly explaining how to use it to protect your privacy.

Unfortunately, not everyone will benefit from this strategy. This approach may not be appealing to technical users or even useful for that matter. Tunnelbear VPN, on the other hand, isn't designed for techies.

Nevertheless, we liked many things about Tunnelbear during our time reviewing it. Is this, however, the best VPN for you? In this review, we've set out to answer that question. 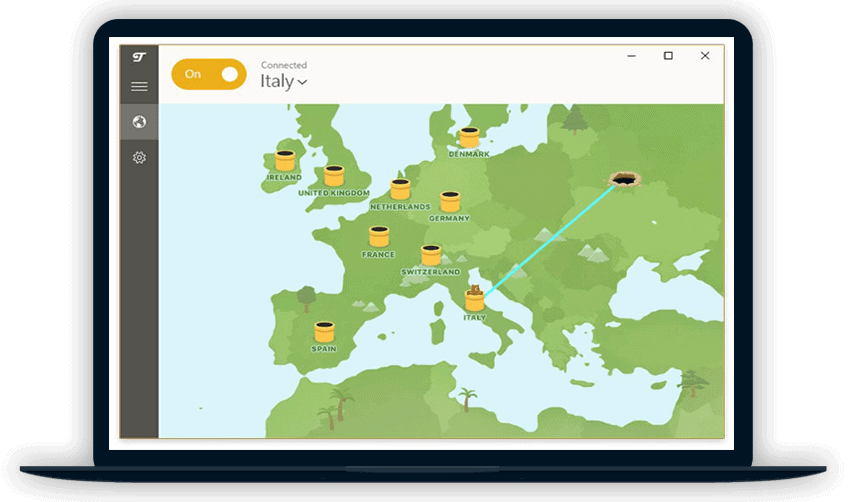 TunnelBear VPN does not have as many features as other VPN services. However, all of the features available work flawlessly and exactly as they should.

If your connection to the server is lost, the VPN will turn off your internet until the connection is restored. With this feature enabled, you can rest assured that your data will not be exposed due to a temporary loss of connection.

You can connect up to five devices to the same service at any given time. That means you can simultaneously use the same VPN on your laptop, Android phone, iPhone, computer, and tablet.

Even though it significantly slows down the connection, we found ourselves using the GhostBear feature a lot. This function's concept is straightforward. Many websites block users who use a VPN from accessing their services. The GhostBear feature camouflages the fact that you're connected to a VPN. As a result, you can access the site, and its features with it turned on. 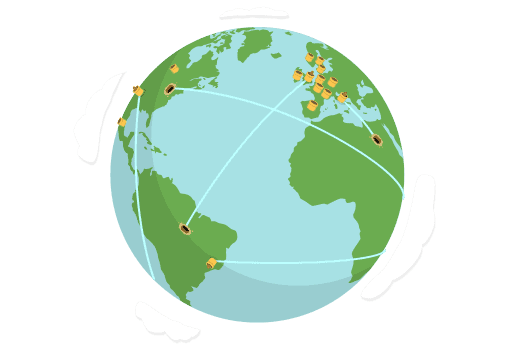 TunnelBear VPN employs AES 256-bit encryption at the industrial level. By default, encryption is enabled, which means that all data sent to and from your computer is encrypted.

The company, based in Toronto, operates 1800 VPN servers in 23 countries worldwide. As a result, South America, North America, Australia, Asia, and Europe are all covered.

Want to make sure you're safe no matter where you're connected? Then, based on its proprietary algorithm, this feature selects the fastest and safest server. As a result, you can connect to the best server with just one click. We discovered that the connection was to the closest and, in many cases, the fastest server during our testing.

TunnelBear has a strict no-logging policy, despite Canada's membership in the five eyes. We looked over their privacy policies and discovered that they do not keep any logs. Furthermore, the company will not provide user information if a court order is issued.

As a result, your identity and user activity are safe and secure. However, TunnelBear, like every other VPN we've reviewed in the past, has its share of advantages and disadvantages.

No service is without flaws. However, knowing them can assist you in determining whether the disadvantages and benefits are worth it for you. 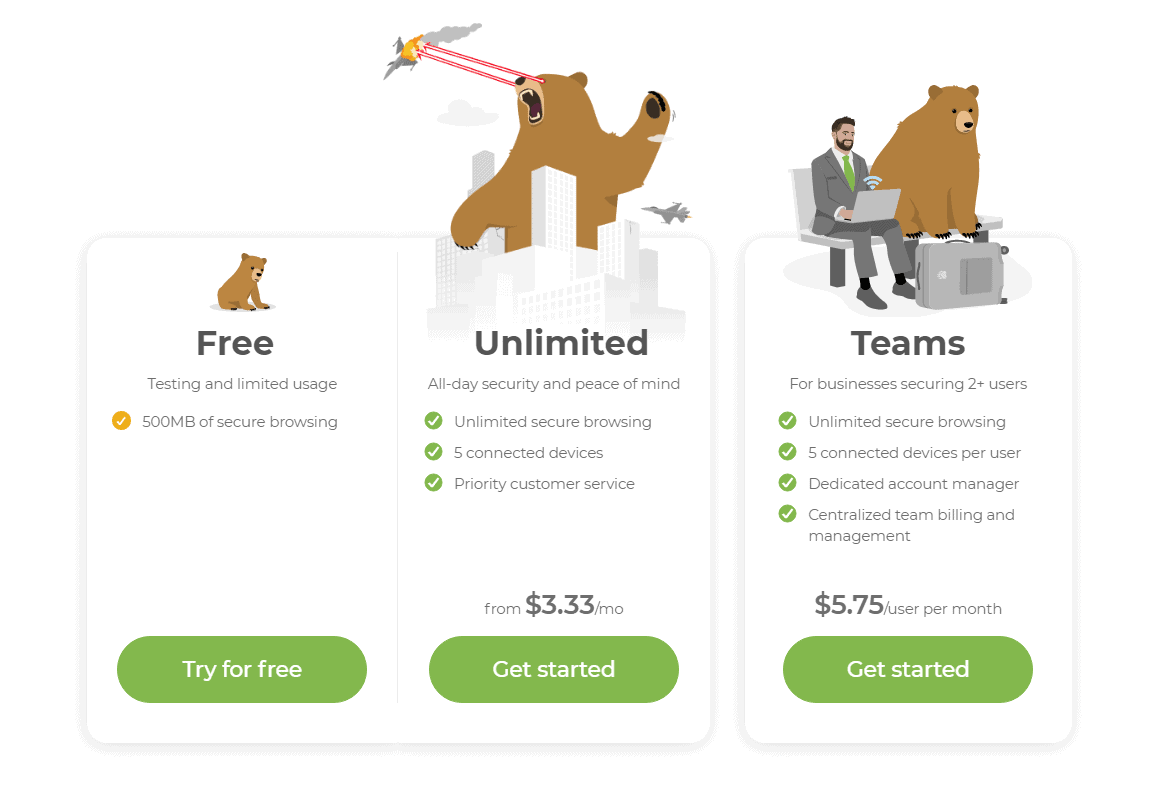 Here are five reasons why you should use a VPN

For example, if your government or school has blocked Facebook, Twitter and YouTube it can be frustrating to not have access to these sites. A VPN lets you access geo-blocked websites and services by routing all of your web traffic through an encrypted tunnel and giving you an IP address from another location. This way, the website sees your request as coming from somewhere else and allows you to gain access. Plus, if YouTube is blocked and you want to watch a video, connect through a VPN and watch one of the many available videos that can help with your studies or work.

One of the easiest ways for people to get information about you is tracking what you search for online while using public Wi-Fi networks such as those at restaurants or coffee shops. Hackers can steal your passwords, credit card information and other data when you're connected to these networks. A VPN encrypts all of your web browsing so no one can see what you search for or collect your personal data while using public Wi-Fi.

3: Stay Private Throughout Your Day

It might seem like you're keeping to yourself at work but even on the job there are people who could be monitoring what you do online. Using a VPN means that your activity is hidden from anyone trying to monitor where you go and what you do online. Additionally, China has started cracking down on which websites their citizens can view so some Chinese nationals set up VPN services in order to get around the "Great Firewall" which is similar to a proxy. Even if you're not in China, it can be helpful to use since your web traffic is encrypted and routed through another location which means your privacy is protected.

It's easy for hackers to access the data on your phone or computer by using keyloggers , programs that track everything you type on your keyboard. This includes logins and passwords so make sure you use a VPN service to encrypt this information while you're online. The VPN creates an encrypted tunnel between yourself and the website or service that only you have access to with the proper security code or password. Not even someone monitoring what you do online will be able access this information making it one of the best ways to keep sensitive information safe.

5: Unblock Websites and Get Around Censorship

When your traffic is encrypted people can't see what you're downloading or that you're using a VPN at all. This makes it helpful for unlocking region restricted content such as BBC videos which require an IP address in the UK to view. It's also common to use a VPN while living in countries with strict internet censorship since VPN encrypts web browsing and then routes it through another server elsewhere making it nearly impossible for oppressive governments to monitor what their citizens are doing online.

Customer service appears to be terrible at first glance because there is no phone or live chat support. As a result, you're stuck with the ticket-based system, which we don't recommend due to its slowness.

However, we wanted to see how long it would take them to respond and fully answer our question. We did this by submitting a ticket and inquiring why we couldn't access Netflix. We were blown away by the speed with which they (the TunnelBear team) responded.

While they claim that it takes them 48 hours on average to respond, the fact that they responded within a few hours is impressive. That's a lot of speed for a ticketing system.

The customer service's answer to our Netflix question was that the service (Netflix) actively blocks VPN IPs. They were, however, working on obtaining new IP addresses, which would allow people to access and stream Netflix shortly.

Is a VPN required to use TOR Browser?

No. TOR is an entirely separate browser with a different purpose and focus. You can use the Tor Browser without a VPN, but you will not have as much protection from snoopers as you would if you had the combination of both using them together. You would be trading one security risk for another. Instead, use a VPN and make sure it is turned on before opening TOR.

What is the difference between a proxy and a VPN?

Are VPNs better than proxies?

VPNs are definitely better than proxies. They provide a much more extensive list of security features, making it tremendously challenging for hackers to intercept your browsing data, whereas proxies do not have these features. VPNs are also explicitly designed to make you appear as if you are coming from the country they are based in, while proxies are merely meant to reroute your traffic through another IP address. Finally, since VPNs encrypt your data, they also allow you to circumvent geoblocks by hiding the fact that you're located somewhere else.

Is TunnelBear Worth It?

TunnelBear isn't the fastest VPN, and it isn't so much about grunt as it is about usability. However, it's impressive that they focus solely on security to make the service simple to use.

They deserve credit for creating a system that is so simple to use that even our mothers could use it. TunnelBear VPN is a good choice for people who have never used a VPN before and don't want to deal with the technical jargon of traditional VPN services.

However, we wouldn't recommend it to anyone who wants fine-grained control over everything from port selection to encryption algorithm. Furthermore, we were unable to unblock Netflix during our testing period.

However, the speeds are reasonable for the price, so you should be able to stream smoothly, except 1080p on a 10Mbps connection, which may be due to the throttling imposed by VPN services.

Browse the internet from 23 countries

By: Michael Miller
Michael is the CEO of VPN Online, one of the fastest-growing media companies in the cyber-security space. VPN Online was started in 2019 after Michael consulted with many Fortune 500 companies and saw the lack of understanding about cybersecurity many of their employees had.
Quick navigation
1. TunnelBear Review
2. TunnelBear Features
2.1. Vigilant Bear aka Kill-Switch
2.2. 5 Connections Simultaneously
2.3. GhostBear
2.4. Ironclad Encryption
2.5. Number of servers
2.6. Closest Tunnel
2.7. No Logging
3. The Pros
4. The Cons
5. TunnelBear Pricing
6. Here are five reasons why you should use a VPN
6.1. 1: Gain access to location-restricted or blocked content.
6.2. 2: Keep Your Data Secure on Public Networks
6.3. 3: Stay Private Throughout Your Day
6.4. 4: Keep Your Passwords Secure
6.5. 5: Unblock Websites and Get Around Censorship
7. TunnelBear Customer Support
8. Frequently Asked Questions
8.1. Is a VPN required to use TOR Browser?
8.2. What is the difference between a proxy and a VPN?
8.3. Are VPNs better than proxies?
9. Is TunnelBear Worth It?