CyberGhost is regarded as one of the best VPN services in the world. It allows users to unblock geo-restrictions and browse the internet like they’ve never done before. More importantly, the provider anonymizes them, making it virtually impossible for hackers to compromise them.

The first lasts 24 hours and is exclusive to macOS and Windows. Meanwhile, the second lasts for 7 days. Sadly though, it’s only available for Android and iOS.

On the bright side, both free trials don’t skimp out when it comes to features. However, they don’t support simultaneous device connections. For that reason, provide you with comprehensive online security.

You can also get CyberGhost risk-free by using the 14/45-Day trial. You see, CyberGhost has a money-back policy that lasts for either 14 or 45 days, depending on the subscription you got.

By taking advantage of this policy, you’ll be able to ask for a complete refund after purchasing CyberGhost. Unfortunately, though, there’s no way for you to avoid spending money.

CyberGhost’s free trial comes in two forms. Both of which do not support multiple simultaneous connections. Moreover, they don’t allow you to use CyberGhost on devices other than the one you registered on. As a result, it will not be possible for you to have all-around digital security after availing either of the VPN provider’s free trials.

The first CyberGhost free trial is available only for Windows and macOS devices. It comes with all the necessary security features that you’d want to use. Sad to say, it only lasts for 24 hours.

In comparison, CyberGhost’s second free trial lasts for an entire week. However, the free trial can only be availed upon using your iOS and Android device. And for those who aren’t aware, CyberGhost’s apps for these platforms don’t come with a built-in ad & malware blocker. Aside from that, they also don’t allow you to toggle the WireGuard VPN protocol.

With all that being said, here are all the steps necessary to get both of CyberGhost’s free trials:

Don’t worry though since there’s a way to use the VPN with all the devices that it’s compatible with without risks. Be that as it may, you will indeed need to spend, which can be a bummer.

CyberGhost’s 14 and 45-day trials are not free. You shall need to buy any one of the provider’s subscriptions. After that, you’ll have to contact customer support via chat or email and then request a refund. For anyone who is wondering, the reason behind this refund won’t matter. You will be backed by CyberGhost’s money-back guarantee policy under any circumstance.

The difference between the 14-day and 45-day trials is simple.

By getting a 1-month subscription, you’ll entitle yourself to the 14h-day money-back trial. If you buy any other of CyberGhost’s subscription plans, you will be entitled to the 45-day trial.

Now here’s what you need to get CyberGhost using the 14/45-day trial:

Getting CyberGhost via the 14 or 45-day trial method is the only way for you to try the provider in its entirety without risk. That’s right. By using this method, you’ll be making no compromises in regards to your online security.

How come? Because you shall be able to use CyberGhost on every device that it’s compatible with. Moreover, you will also be entitled to a maximum of 7 simultaneous device connections.

What Does The PureVPN Free Trial Include?

CyberGhost’s free trials don’t come with simultaneous multiple device connections support. Due to that, you will not be able to use the VPN provider with all your gadgets. Moreover, it will not be possible to fortify the digital privacy and security of the other members of your household.

In comparison, the 14-day and 45-day money-back trials of CyberGhost offer 7 simultaneous device connections. That means you may use the VPN service with all of your internet-ready gadgets and still have ample room to protect your loved ones.

Netflix And Other Streaming Platforms

The network of CyberGhost is full of servers that can unblock Netflix along with other popular digital streaming platforms.

Using every risk-free method of getting CyberGhost will grant you access to its entire network of servers. As a result, even using a free trial, you’ll be able to watch a plethora of new movies and shows. I’d have to say that this is great for movie buffs as well as binge-watchers that stream on a daily basis.

CyberGhost is good for torrenting. It has many P2P-enabled servers that are capable of letting you download anonymously. On top of that, the provider is compatible with all major torrent clients. Hence, it won’t matter if you’re using Vuze, Deluge, uTorrent, or even BitTorrent.

It won’t matter whether you use CyberGhost’s free or money-back trials. Safe torrenting is sure since all the methods to procure the VPN entitle you to its network of 7000+ servers.

Sadly, multiple app support isn’t available with both of CyberGhost’s free trials. After using them, you may only use the provider on the device you used for registration. It’ll not be possible to enjoy it on each of your electronic devices to see how well it works for each of them.

Meanwhile, the 14 and 45-day trials of CyberGhost let you use it with all the platforms it’s compatible with.

And for those wondering, CyberGhost works with Amazon Fire TV Stick, Windows, Linux, iOS, macOS, and Android. You may also use the VPN with practically any other kind of device that accesses the internet via a router.

Both of CyberGhost’s free trials don’t come with browser extensions.

This shouldn’t be much of a setback though. How come? Because VPN browser extensions are arguably inferior to apps in every way. Aside from only providing local browser protection, they also don’t have many of the security features that their application counterparts have.

In comparison, the 14-day and 45-day trials of CyberGhost allow you to use the VPN provider’s extensions for Chrome and Firefox. Hence, you may download these extensions then utilize them as backups if ever your CyberGhost app becomes compromised for any reason.

CyberGhost prides itself on using military-grade AES 256-bit encryption. On top of that, its apps have support for every sought-after VPN protocol there is. As a result, you’ll get to configure the provider to meet your exact needs.

As you might’ve expected, CyberGhost adheres to robust encryption standards for all its users. You’ll still be entitled to the same encryption and protocols mentioned above regardless of how you obtained the VPN.

The 24-hour and 7-day free CyberGhost trials both let you use the provider’s kill switch. You will also gain access to the VPN’s kill switch if you avail it via the money-back guarantee trials.

For those unaware, a kill switch is a very useful VPN security feature. It safeguards you from unwanted digital exposure. How does it work? By cutting off your device’s connection to the internet if its connection to the CyberGhost’s server becomes compromised.

CyberGhost’s world-class customer support isn’t just available to paying subscribers. Everyone can contact the provider at any time to ask questions or request assistance.

And yes, I have nothing but praise for CyberGhost's agents. Each one that I communicated with answered very quickly, concisely, and cordially.

Why Would You Need A Free Trial Of CyberGhost?

Furthermore, it sometimes paves the way for enjoyable streaming sessions by not introducing buffering, quality drops, or lengthy loading times. How? By eliminating the bandwidth throttling that’s secretly imposed by your ISP to prevent overloading.

Torrenting: VPN providers like CyberGhost value your anonymity. They successfully keep your identity hidden as you download torrents. In doing so, they prevent malicious entities like cybercriminals and government monitors from conducting surveillance on you.

Privacy & Security: Privacy and security are two things that CyberGhost doesn’t fail at providing. As mentioned earlier, it uses military-grade AES-256 encryption and maintains support for all major protocols. Moreover, it has a concrete zero-logs policy and a flawless security record.

CyberGhost’s apps are equipped with every standard VPN security feature. On top of that, they let you avail of paid-add on features that you may find useful. An excellent example of this is a secret photo vault that’s exclusively available on CyberGhost’s apps for iOS.

Travel: Travellers, in particular, will find CyberGhost especially useful. That’s because the VPN can allow them to browse the internet as they normally would in foreign countries. It will also provide them with access to sites and online services that wouldn’t normally be available.

CyberGhost is also useful for shopping. It lets you browse your country’s local online retail stores to avoid paying for unreasonable markups.

Sadly though, despite having the largest VPN server network, CyberGhost can’t bypass China’s Great Firewall. As such, it’s not the best provider to have for those who frequently visit countries where the internet is heavily restricted.

CyberGhost’s free trials are a great way to try the VPN risk-free. However, I can’t recommend them as they don’t deliver the full CyberGhost experience.

Why? They don’t allow for multiple device support or support multiple simultaneous connections. In addition, they also don’t give you the chance to try out any of the provider’s browser extensions.

In comparison, both of CyberGhost’s money-back trials provide you with everything the VPN has to offer. Sadly though, they’re not free. You will need to shell out cash. In fact, a hefty amount if your goal is to try CyberGhost risk-free for 45-days. 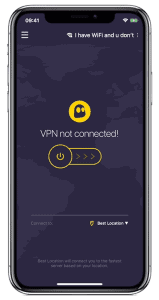 By: Erwin Caniba
Eric is the co-founder of VPNOnline. He has been an avid user of VPNs since 2012. He has tested all of the major VPN providers and shares his findings on this website. Follow Eric on Facebook.
Quick navigation
1. CyberGhost 24-Hour and 7-Day Free Trials
2. CyberGhost 14-Day and 45-Day Trials
3. What Does The PureVPN Free Trial Include?
3.1. Simultaneous Connections
3.2. Netflix And Other Streaming Platforms
3.3. Torrenting
3.4. Apps On Platforms
3.5. Browser Extensions
3.6. Encryption
3.7. Kill Switch
3.8. Live Chat
4. Why Would You Need A Free Trial Of CyberGhost?
5. Summary