VyprVPN is a rising star in the VPN industry. It safeguards and anonymizes its subscribers. On top of that, it circumvents most of the geo-restrictions that it’s faced with. The provider also maintains an excellent customer support network. Furthermore, it has very user-friendly applications, which increase its appeal to a very large demographic of individuals.

At present, VyprVPN has a 3-day free trial. Sadly, it’s only available for smartphones that are running iOS or Android. On top of that, it doesn’t support multiple simultaneous connections.

VyprVPN can also be tried using the 30-day trial. Like the aforementioned trial, it too does not come with risks. However, it does call for you to spend cash. On the bright side, using this method, you’ll be entitled to everything that comes with a paid VyprVPN subscription.

Unbeknownst to many, VyprVPN does have a free trial.

It only lasts for 3 days and is exclusively available for iOS and Android smartphones. Once you avail of it, you’ll not be entitled to multiple device connections. That means you’ll have to make compromises when it comes to your online security.

It’ll not be possible to stay protected on each of your devices. Furthermore, you won’t get to safeguard everyone in your household.

These are all the steps you must take to get VyprVPN’s free trial:

Please remember that VyprVPN will automatically bill you after the 3-day trial is up. To prevent this, you’ll need to inform customer support that you don’t wish to continue with the VPN.

To procure VyprVPN without risks using the 30-day trial, please follow these steps:

Although the 30-day trial method isn’t truly free, it is risk-free. More importantly, it has more to offer than the 3-day free trial. That’s because you’ll be able to use VyprVPN on more devices.

Besides that, multiple simultaneous device connections shall also be possible. Consequently, remaining protected on all your internet-ready gadgets won’t be difficult.

If anything, the only major downside with using the 30-day trial method is the fact that you must contact customer service. Doing this is necessary since you’ll need to request your money back.

What Does The VyprVPN Free Trial Include?

Thus, it is the way to go if you access the web using more than one device.

Netflix And Other Streaming Platforms

The servers of VyprVPN are great at unblocking streaming website geoblocks, including Netflix. Luckily, both the free trial and the 30-day trial of the provider allow you to access all of them. As a result, you’ll get to watch all sorts of new content even if you acquired VyprVPN using zero-risk methods.

While you can torrent after getting VyprVPN using the 3 and 30-day trials, we don’t recommend doing so. That’s because VyprVPN can’t hide your IP address. During my tests using IPleak.net, the VPN has consistently failed, proving that it’s not suitable for torrenting.

You may only use VyprVPN on your Android or iOS device after getting it via the 3-day trial.

Meanwhile, the 30-day money-back trial makes you eligible to use all of VyprVPN’s apps. Now for those wondering, the VPN has applications for Windows, macOS, Android, iOS. Aside from that, it also has router support.

Unfortunately, the people behind VyprVPN haven’t developed any browser extensions yet. As a result, extensions won’t be available regardless of how you get the provider.

VyprVPN takes encryption very seriously. It grants even those who get it for free with AES-256 military-grade encryption. Moreover, the provider also lets non-paying subscribers select whatever protocol they want. Hence, they’ll be able to customize their experience.

The kill switch of VyprVPN is only available for Windows and macOS. Therefore, those who get a free trial for Android or iOS won’t have access to an automatic kill switch. However, those that utilize the 30-day money-back trial will.

Non-stop live chat support isn’t a luxury that’s exclusive to paying VyprVPN customers. All those who subscribe to the VPN can get in touch with its representatives at any moment’s notice. That is great as many rivaling providers don’t have 24/7 support or support for non-paying customers.

Why Would You Need A Free Trial Of VyprVPN?

Streaming: VyprVPN will be your best friend if you enjoy streaming online content. The reason why is because it can get over nearly every geo-restriction that it’s pitted up against. Besides that, the VPN is also capable of facilitating seamless streaming sessions. It doesn’t cause buffering, lag, or lengthy loading times because of its network of blazingly fast servers.

Torrenting: Torrenting is a very dangerous activity to do on the internet.

Without a VPN to hide your IP address, cybercriminals will easily get to identify you. Aside from finding out who you are, they’ll also discover where your location is. Using the information they have, they’ll make you and your family a target of all sorts of crimes.

Privacy & Security: VyprVPN is a relative newcomer to the industry. Despite that, it has been able to almost unanimously garner the trust of online security experts.

Like other VPNs of its caliber, VyprVPN adheres to robust encryption standards. It utilizes AES 256-bit encryption, which is considered to be the best. Additionally, it also supports all major VPN protocols. In fact, the VPN provider even lets you use WireGuard on certain devices.

The network of VyprVPN is small but secure. That being said, not all its servers are RAM-disk enabled. As such, if it really wanted to, the provider could still compromise your private info. It doesn’t do this though. Why? Because it has a concrete zero-logs policy that has never been tarnished.

As stated earlier, VyprVPN’s Windows and macOS apps are the only ones with kill switches. On the bright side, the rest of the provider’s apps come with split tunneling and a malware blocker. Moreover, they also have two VyprVPN-exclusive features called VyprVPN DNS and VyprVPN cloud. The former protects you from DNS leaks while the latter is a cloud storage solution.

Travel: A VPN like VyprVPN serves as a very useful tool for frequent travelers.

It allows you to surf the internet as you normally would at home. With it, you’ll get to access the versions of websites that you’re used to. In addition, it’ll be possible to tap into unavailable web services. This is great for business owners that need access to the tools necessary to run their enterprise wherever they go.

VyprVPN can also help you save big. How? Be letting you shop from online retail platforms that have cheaper prices. You shall get to obtain the product you want and avoid markups.

Last but not least, it should also be mentioned that VyprVPN can circumvent the Great Firewall of China. As a matter of fact, our testers in the country have nothing but praise for the provider. That’s because it has been able to get around local censorship measures with decent reliability.

The free trial of VyprVPN lasts only 3 DAYS. Moreover, it’s exclusively available to Android and iOS devices. After availing of it, it’ll not be possible to use the VPN on any device other than the one you registered on. Therefore, there’ll be no way to have comprehensive digital security.

A better alternative to VyprVPN’s free trial is the 30-day money-back trial. Why so? Because it entitles you to everything that comes with a normal paid VyprVPN subscription. If anything, the one downside to it is the fact that you’ll need to spend money. Following that. It’ll be necessary to contact customer support to request a refund. 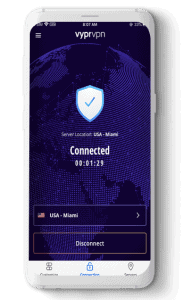 By: Erwin Caniba
Eric is the co-founder of VPNOnline. He has been an avid user of VPNs since 2012. He has tested all of the major VPN providers and shares his findings on this website. Follow Eric on Facebook.
Quick navigation
1. VyprVPN 3-Day Free Trial
2. VyprVPN 30-Day Trial
3. What Does The VyprVPN Free Trial Include?
3.1. Simultaneous Connections
3.2. Netflix And Other Streaming Platforms
3.3. Torrenting
3.4. Apps On Platforms
3.5. Browser Extensions
3.6. Encryption
3.7. Kill Switch
3.8. Live Chat
4. Why Would You Need A Free Trial Of VyprVPN?
5. Summary